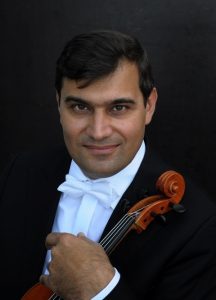 Russian born Austrian-Croatian violist Wladimir Kossjanenko began his musical education at age of five. After his graduation at the Bayseitova special music school in Alma-Ata he studied viola from 1986 to 1991 with Vladimir Stopitchev at the Conservatory in St. Petersburg. In this time he also visited conducting class of professor Ilya Mousin. Whilst studying he appeared as a principal violist and assistant-conductor of the “Ensemble of Leningrad Soloists”.

In 1991, following an invitation from the Gustav Mahler Youth Orchestra directed by Claudio Abbado, he came to Vienna. He continued his studies with Hans Peter Ochsenhofer and Thomas Kakuska at the Vienna University for Music and Performing Arts (graduated 1999 with distinction and Master of Arts degree) and later with Michael Kugel at the Royal Conservatory in Ghent, Belgium.

Between 1993 and 1996 he was a regular substitute with Vienna Philharmonic, Wiener Staatsoper and Salzburg Festival. From 1994 to 1998 he was a principal violist of the Graz Philharmonic Orchestra and Graz Opera House.

1997 he has won the Union Fund and Management Prize at the 6th International Lionel Tertis viola competition (Isle of Man, England), and the special prize and medal of the Perrenoud Foundation (Neuchâtel, Switzerland).

From 1998 to 2007 Wladimir Kossjanenko was member of the Hugo Wolf Quartet, which was awarded the European Prize for Chamber music in Paris in 1999 and the “Pasticcio” Prize of the Austrian Radio in 2003. With the Hugo Wolf Quartet he made extended concert tours throughout Europe, North and South America, United Kingdom, Ireland, Korea and Japan.

In the past 15 years Wladimir Kossjanenko has appeared as a soloist and chamber musician at most prestigious concert venues, among them in:

As a conductor he has appeared in Austria, Germany and Croatia.

Since 2008 he has been professor for viola and chamber music at the Academy of Arts at the University of Split/Croatia.  Since 2009 he works regulary with the Zagreb Soloists.

In 2011 he formed from the students of the Academy of Arts in Split a String Orchestra with which he several concert performances and a CD production completed.

2012 he founded together with the pianist Vesna Podrug a festival “Day`s of J.S.Bach in Split”, which is organized annually for the birthday of the composer.