“Without music, life would be a mistake”
– Friedrich Nietzsche

A year has gone by and the doors of the concert barn in the Medved homestead are opening again. After last year’s enthusiastic response from public and performers alike, it has become clear that the International music festival “Ursus” is a welcome addition to the musical landscape in central Slovenia. This edition will focus on multinationalism, the mixing of cultural influences and the resulting enrichment of both personal and national cultural identity.
Renowned musicians are coming from many different parts of the world: China, Venezuela, Serbia, Croatia, Italy and Slovenia. Each of them will bring their rich tradition and a specifical individual approach, presenting us with an extremely interesting and diverse programme.
The opening concert features some of the most important composers of the European baroque era. French ballet, Czech musicality, Italian temperament and German counterpoint will complement each other in several compositions for wind instruments. An exotic combination seldom seen in our area: two flutes, a bassoon and a harpsichord.
The Russian master of neoclassicism, Sergey Prokofiev, wrote his musical tale for the central children’s theatre, Moscow, with the intention of “cultivating musical tastes in children from the first years of school.” The music will be accompanied by the illustrations of Teja Plečnik and the storyteller will be the versatile Nika Vogrič Dežman. Children are growing, the intention stays the same.
The final concert will take us on a trip around the world. Japanese painter Hokusai Katsuhika, a self confessed “old man crazy about painting”, is most probably “guilty” of the development of impressionism in France. A century later, the composer Takemitsu dedicated his trio to a great influence of his, Claude Debussy. The wheel goes around. Works by famous Indian sitarist Ravi Shankar, Italian opera giant Giacomo Puccini, modern Spanish composer Manuel Moreno-Buendia and South American flutist/composer Efraim Oscher will conclude our musical journey where it also began – in Podkum.

Every thing that has meaning to us, requires some effort. It is probably this very effort that makes that certain thing for us meaningful. For a musician it is music; for an audience member, the experience of a concert. The effort required in this case is the journey to Medved homestead in Podkum, which lasts the exact amount of time necessary for one to relax, empty one’s mind and get ready for … 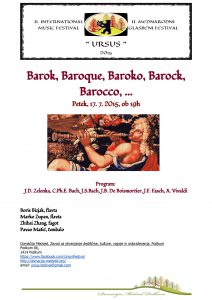 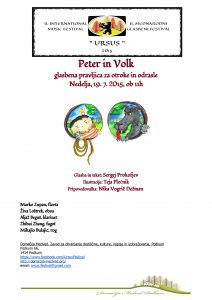 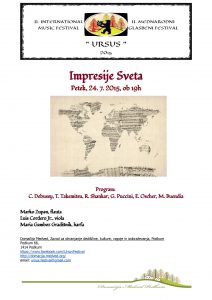 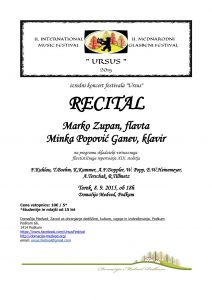