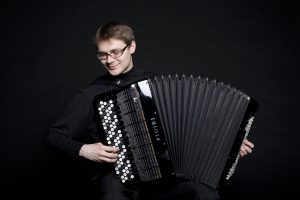 Klemen Leben is an accordionist, composer, improviser, pedagogue, researcher, and strong advocate for meaningful contemporary music. He studied accordion with Prof. Ivan Koval and Prof. Matti Rantanen at the Franz Liszt Academy of Music Weimar and Sibelius Academy in Helsinki. Momentarily he is a doctoral student at the Doctoral School at the University of Arts Helsinki (Sibelius Academy).

His „exceptional concert“ at the 28th Music Biennale Zagreb (April 2015) has been praised as „the best moment“ of this year‘s edition of this renowned festival of contemporary music.

He is a winner of several international competitions – the most prestigious of them the 46th accordion competition Klingenthal 2009 – and records for many broadcasting companies (ORF, Deutschlandradio Kultur, SWR, ZDF, RAI, HRT, RTV Slovenia and others).

His repertoire covers a wide range of musical styles: from Renaissance to original contemporary music for accordion. An important part of his musical activities is cooperating with composers (Aho, Hosokawa, Katzer, Lebič, Pintscher, Šenk and others), resulting in a notable number of premieres. The highlight of the current concert season will be the world premiere of an accordion concerto by Urška Pompe with the RSO Slovenia. The concerto, which is dedicated to Leben, will be broadcasted live.

Believing that musicianship requires more than performing, Leben is also active as and improviser and a composer. His works, ranging from works for solo instruments, chamber music to orchestral music, are performed internationally. Leben‘s composition „Formula magica“ (fl, ob, sax, pno, acc, vlc) has been awarded 3rd prize at the 7th int. competition for composers preArt in Basel (CH).

Leben is also internationally active as a jury member at renowned accordion competitions.