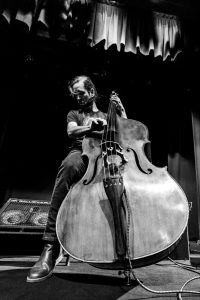 PIERO MALKOČ was born in Ljubljana in 1980. As a pianist he completes the Secondary Music School in Ljubljana. He continues to study double bass and and graduates in the class of prof. Zoran Markovic at the Musical Academy in Ljubljana.

During his studies, he is a member of the ensemble of contemporary music and collaborates with numerous international orchestras under the auspices of Jeunesses Musicales International. As a soloist in 2002, he played the premiere of Arhetipi’s for solo double bass and orchestra composed by Brina Zupančič. In 2006 he became a member of the Slovene Philharmonic Orchestra and after two years he went to Maribo Opera Orchestra. He also collaborated with the Slovenian National Theater in Kabaret and with the Ljubljana Drama in the performance of Ana Karenina. With the musical theatrical group Paramundus he collaborated in the chamber opera “Novi čevlji” and “Mnemosyne” with which they won the Slovene drama weeks award of 2007. He was a member of chamber orchestras: Soloists Piranesi, Gaudeamus, etc.

He is also co-founder of the Adrianis Chamber Orchestra. He has appeared several times in various chamber compositions and was a member of Forellius quintet and quintet Funtango with whom he was active on the concert scene in Slovenia and abroad for a decade. In 2010, he became a principal double bass of the orchestra of Croatian National Theatre in Split and double bass professor at Josip Hatze’s Music School.