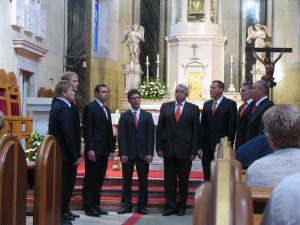 The idea to found an Octet came to the mind of some singing enthusiasts already in the seventies of the last century. It finally came to life on the 19th of November 1977, when a public audition took place. In the begining they were established under the name Octet of the Workers Secular Society Freedom Zagorje ob Savi.

The Octet started having concert in the year 1978. Their first independent concert was on the 8th of March in Workers Hall Zagorje. Also in the same year they took place at the festival for Octets in Šentjernej. A year later they had their first very succesfull guest appearence at the Klapa Festival in Omiš, Croatia. In that time the friendship with the Croatian Klapa Omiš was born and in the year 1983 after the guest concert in Austrian Styria the same kind of relationship developed with the Mixed chorus Nestelbach. Toward the end of the eighties the collaboration with other Octets of Slovenian miners gained more and more importance.

During all the years of their activities Zagorski oktet performed at several municipal events as well as throughout Slovenia. Very frequent were also the trips abroad.

Octets repertoire is based mainly on Slovenian national and art songs. Apart from that, their program consists of works from classical and sacral composers and dalmatian or negro spiritual songs.

Octet received several awards for their work. Among them are Plaquette Dr. Slavko Grum – the highest recognition for cultural achievements of the municipality Zagorje ob Savi, silver award of the municipality Zagorje ob Savi, award of the Zasavje singing comunity, Coat-of.arms of the city Omiš, Coat-of-arms of the Austrian Styria and others. Varying awards were presented to the singers also individually.

Members of the Zagorski oktet:

Since the year 2002 the artisic leader of the Octet is Prof. Urška M. Luzar.